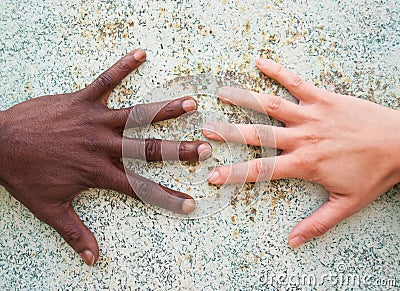 I myself have never been in an interracial relationship, but I see the struggle. To say that people have an uphill battle when living their lives together is an understatement. You’re under constant pressure to always defend yourselves when faced with opposition. But are there exceptions? Do we accept interracial dating for certain groups and not others? Is this more of an isolated situation? It’s tough, but you have to look at both sides in regards to people choosing to date outside your ethnicity.

What are both sides? Well first, let’s look at what we mean by interracial dating. In the United States, when referencing interracial dating we pay more attention to Black and White people dating. We don’t get into the topic of Puerto Rican and Chinese; Indian and Tai; Saudi Arabian and Brazilian. In America, it’s typically Black male and White woman; White male and Black woman. But just that description is enough to confuse people. The problem starts at the color designation. This nation has been color constructed for so long as a means to designate a group your opposition or enemy.

The issue that people have with interracial dating is the idea that now you are forced to face those hidden emotions. Now everything is in your face; something a lot of people don’t like to see. But why is it anyone else’s business what life you lead. Because as much as we don’t like someone telling us how to live, we feel we have to voice in others’ lives.  But which interracial situation causes the most problems. In my opinion, Black males and White females.

There is this coveting that pertains to White females and this looming cloud over Black males. But I learned something that no one really wants to talk about regarding the matter. It’s about the esthetics of the female if it matters to White guys and Black women. If the female is pretty it makes the White guy more upset and if the female is ugly, it makes Black women more upset. This sounds ridiculous, but it exist on both sides. If the Black woman is unattractive then Black guys could care less. The only exception  is that you never hear White females speak outwardly about any of this.

So basically, it doesn’t matter to a great extent the ethnicity as it is the physical attractiveness and success of the person. In other words, you make yourself appear like you care, but ostracize within your own group. These are the things that people in interracial relationships have to deal with in society. Now is this an isolated situation or is it national. I do think it exist throughout the country, but it’s more overt in certain regions.

Even though the it has been over 50 years since the end of the Civil Rights Movement, there are still pockets of America that are against interracial dating. The more known places are the South and Midwest towns and cities. You can’t see it as openly on the West and the East because they are more liberal. So, living in a city like New York City or Los Angeles is a different lifestyle compared to a small town in Texas or Indiana. Whatever the case may be it takes strong people to deal on a daily with the ignorance of people in our society.

5 Replies to “Interracial Dating: Does It Matter?”